On May 25, 1996 the California Indian Museum and Cultural Center was officially established at the Presidio of San Francisco. This former Army Post is world renowned for its spectacular beauty and historical significance. What is less known is that its creation by the Spanish in 1776, came at a grave cost to the area’s indigenous people. Contact with Europeans brought disease and cultural destruction to the native population. The Presidio was built on land taken without compensation, and by forced Indian labor. Thus, the establishment of this project in the Presidio marked a historic turning point in the history of both the Presidio and the California Indians. However, circumstances have changed. Unfortunately, on June 7, 2001, we decided to withdraw our presence from the Presidio. The Presidio Trust constructively evicted us through its indifference to our goals and those of the Indian people of California. As of November 1, 2000, escrow closed on the building in Santa Rosa, CA. 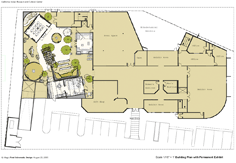 The Museum provides California Indians and the public with a first class museum facility in which to portray California Indian history and culture from an Indian perspective. In addition, the museum showcases and encourages the present-day renaissance of California Indian culture, affirming its survival and continued vitality in the face of extreme adversity. Finally, the museum provides opportunities for Native Americans to receive training and experience in a variety of fields such as museum direction, curation, design, and interpretation.

The Museum was developed by the National Indian Justice Center (NIJC), a 100% Indian owned and operated nonprofit corporation. Originally founded in 1983 as a resource for tribal courts, the NIJC has steadily expanded its mission and is now known as a major force for improving the quality of life and the quality of justice in Indian country.